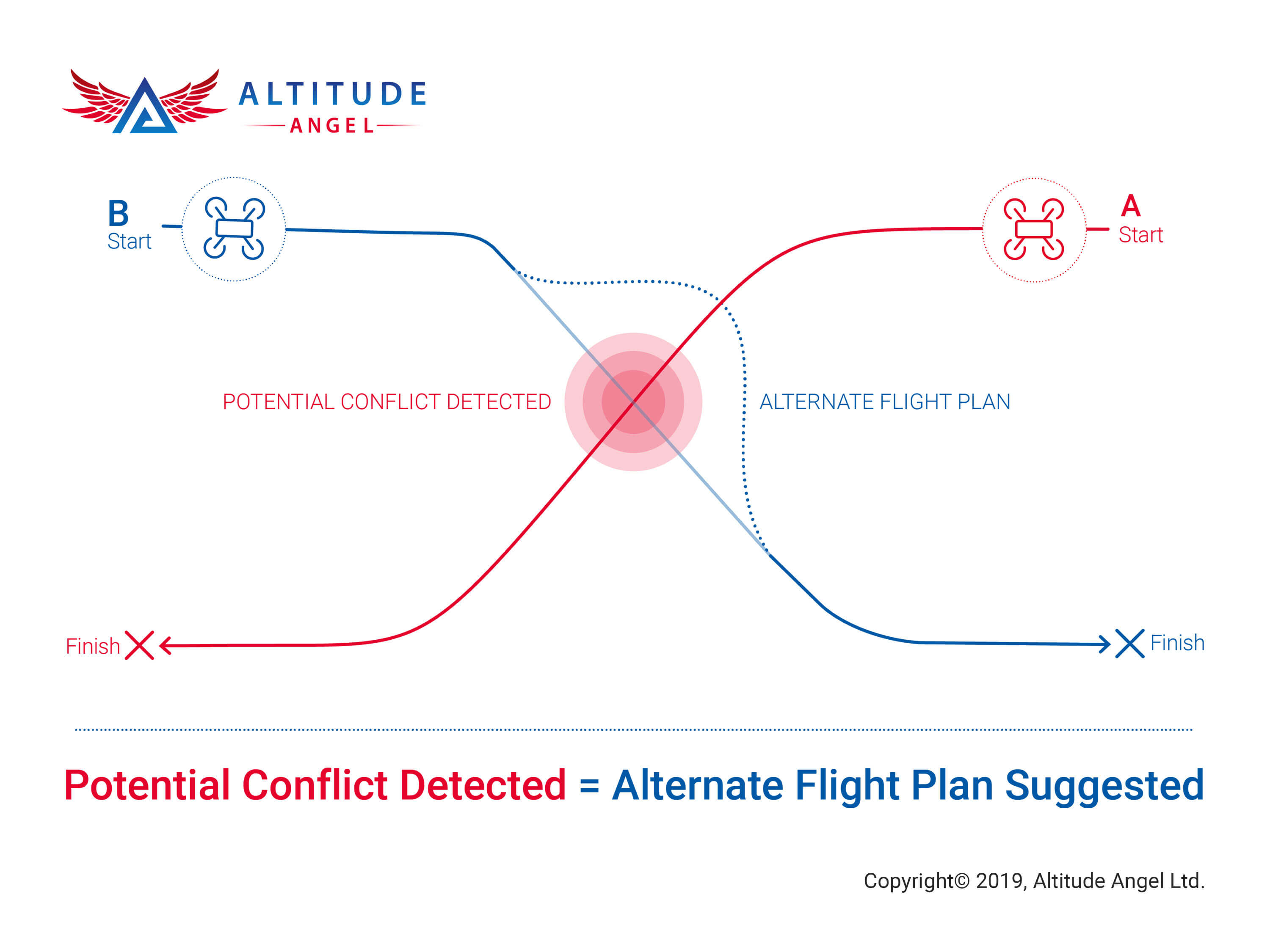 Following the initial launch of the Conflict Resolution Service in July of this year, with Strategic deconfliction, Altitude Angel continued to research, develop and test the pioneering technology behind its Tactical deconfliction service.

Now, with the introduction of Tactical deconfliction, CRS is able to go beyond the pre-flight phase into airborne operations. Tactical deconfliction will provide live alerts when boundaries between remote ID transmitting drones intersect and also offer alternative flight-plans in real-time - enabling pilots to avoid in-air collisions. All of this can be done on a global scale thanks to Altitude Angel’s global ‘elastic’ infrastructure. As the programme expands over the coming few months, Tactical CRS will also help to deconflict drones against aircraft with transponders, as well as drones which don’t have remote ID flying in the vicinity of Altitude Angel’s planned sensor network which will come on-line in spring 2020.

The inability of drone technology to be able to 'deal with the unexpected’, such as manned aircraft, drones and obstacles or airspace closures which weren’t foreseeable before the flight happened, or, would previously have been managed by a human pilot, has been widely considered as a road-block to automated drones flying BVLOS. This in turn has restricted the widespread commercial use of drones. Now, with the launch of Altitude Angel’s Tactical Deconfliction service as an API, automated day-to-day drone flights flying BVLOS is a significant step closer.

Tactical CRS offers implementors a choice about the level of capability they wish to utilise, as well as to have the service deconflict against just their own drone fleet, or against all those been shared publicly.

On the launch of Tactical CRS, Richard Parker, Altitude Angel, CEO and founder said: “We continue to make available advanced technologies which help to solve the fundamental blockers preventing the integration of routine automated beyond visual line-of-sight flights into our skies. Tactical CRS enables fleet operators to quickly and easily integrate complex tactical avoidance guidance at a fleet-level or higher, helping to ‘tick the box’ on safety factors previously blocking widespread adoption.”

Any organisation wishing to join the EAP should contact Altitude Angel via hello@altitudeangel.com, or by speaking to your account manager.

Tactical CRS provides information to drone pilots or the drone itself to ensure separation is maintained during the in-flight phase. The dynamic system will continuously monitor the airspace around a drone for the ‘unexpected’, such as other aerial vehicles or changes to airspace (such as a Temporary Flight Restriction/Dynamic Geofence around a police incident). After identifying a potential conflict, CRS will make the necessary routing adjustments via instructions or alerts which are communicated to the pilot in command or to the drone’s control software, allowing the drone to maintain an appropriate distance between other airspace users or fly around restricted airspace so it can continue safely (and efficiently) to its destination. Tactical CRS respects the implementor’s choices for privacy and control and is intended to supplement any on-board sense-and-avoid technologies, which usually only operate in close proximity to other air traffic.

Conflict resolution information is provided to a drone operator during the flight planning phase (pre-flight phase) of the operation by comparing it to other previously submitted flight plans, against ground and airspace geofenced areas available in Altitude Angel’s worldwide data feeds. The system will then propose alterations to the take-off time and/or route to eliminate the conflict, suggesting minimally invasive changes to permit the mission to continue unobstructed. Developers and drone manufacturers can utilise CRS to securely share flight plan data and opt-in to ‘global conflict resolution’, where all flight plans which have been shared will be checked for conflicts. ‘Private’ modes exist for fleet operators who only want to check for conflicts against their own drones or customers.

Altitude Angel and Saab to partner on Digital Tower technology